ALL THE BEAUTY AND THE BLOODSHED

WINNER! Best Non-Fiction Film: New York Film Critics Circle
Nan Goldin rose from the New York “No Wave” underground to become one of the most revered photographers of the late 20th century; her photographs and slideshows have captured her most intimate relationships with friends and lovers. But more than just a portrait of an extraordinary artist, All the Beauty also looks at Goldin’s grassroots political activism, specifically, her David-and-Goliath battle with the Sackler family, the pharmaceutical dynasty who have been described as the “most evil family in America.”
Academy Award®–winning filmmaker Laura Poitras’s newest film is a testament to the fearless honesty of an irrepressible artist, for whom creative expression and political conviction are inextricably linked. (112 min)
A towering and devastating work of SHOCKING INTELLIGENCE and still greater emotional power… This is an overwhelming film. — Indiewire
Maybe the MOST ESSENTIAL FILM of the year. — Original Cin
If you’ve ever doubted how ART, RAGE, or ACTION can make meaningful change, Goldin’s combination of all three fighting an opioid crisis that nearly killed her is exhilarating proof of the power of “screaming in the streets.” — The LA Times
There is a distinct sense of against-all-odds triumph that hits hard, and lingers long. — The Globe and Mail
It strikes at the core of what makes us human, our hopes and fears and the relationships we invest ourselves in. It is COMMUNITY AS ART AS ACTIVISM in one giant loop, filtered through the gaze of a woman so unflinchingly tireless in her efforts that you cannot help but be on her side. — Collider
Laura Poitras has a point of view, she has passion, she has politics, and there never was any danger of her both-siding this raw, emotionally ferocious story of the world that Nan Goldin inherited and remade, one that she continues to remake with her brilliance and with all the bruises that never heal. CRITIC’S PICK! – The New York Times

It entered the festival circuit as a politically charged take on the standard there-goeth-the-great-artist story and exited it as A PEERLESS ACT OF PERSONAL RECLAMATION. I can’t shake the feeling of being shook by it. — Rolling Stone 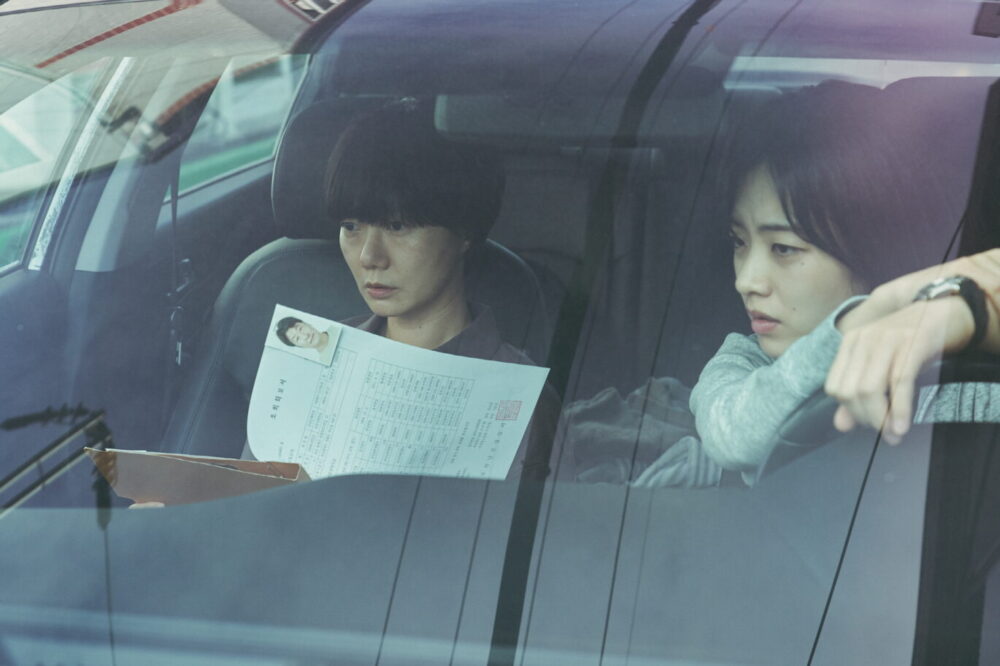 Fri, Feb 10 at at 7:30 • Sat and Sun, Feb 11 and 12 at 4:30 and 7:30 • IU Radio & Television Theater • Purchase Tickets
Five years after winning the Palme d’Or for Shoplifters, Academy Award nominated filmmaker Hirokazu Kore-eda returns with Broker, starring Cannes Best Actor winner Song Kang Ho (Parasite). The film follows two brokers who sell orphaned infants, circumventing the bureaucracy of legal adoption, to affluent couples who can’t have children of their own. After an infant’s mother surprises the duo by returning to ensure her child finds a good home, the three embark on a journey to find the right couple, building an unlikely family of their own.
Japan • 129 min • subtitled
Kore-eda’s nonjudgmental approach to all his films is what makes him such an enticing auteur, and with Broker he brings what he excels at to a new destination with an all-star South Korean cast that really understands his material and delicate subtleties. – The Austin Chronicle

When it all comes together it proves to be yet another poetic and patient cinematic reflection on the families we build for ourselves from one of the best observers of humanity to ever do it. – Collider

Every baby deserves to be loved and taken care of, but so does every adult. Broker does an impressive job of articulating how these two truths are inextricably intertwined. – Paste
Broker keeps on getting funnier and knottier as secret motives are revealed, sympathies shift, mysteries deepen and dangers multiply. – BBC

Our Slavic Film Festival continues on Sunday, Feb 12th at 2pm at the IU Fine Arts Theater with one last screening of EO. All screenings in the Slavic Festival are FREE!
2023 Academy Award® Nomination for International Feature Film.
WINNER
Best Foreign Language Film
New York Film Critics Circle
#1 Film of the Year – Manohla Dargis, The New York Times
This immersive drama by 84-year-old Polish filmmaker Jerzy Skolimowski (Deep End, The Shout, Moonlighting) – is a visually spectacular, often surreal odyssey of a winsome, nomadic donkey named EO (played by six different Polish and Sardinian donkeys). This long, strange trip begins in a Polish circus where EO is adored (and liberated by animal rights activists), moves on to a horse farm (from which he escapes), after which he briefly becomes the mascot of a soccer team. The world experienced through the animal’s eyes is at times cruel, loving, random, dreamy, chaotic, or idyllic. Surprisingly, Isabelle Huppert makes an appearance as The Countess in a palatial Italian villa where the donkey briefly sojourns. EO’s journey speaks to the world around us, an equine hero boldly pointing out societal ills all while on a quest for freedom. (in Polish, Italian and French with subtitles)
EO IS FUNDED IN PART BY THE IU POLISH STUDIES CENTER
Now 84, Jerzy Skolimowski has made one of the rare movies that speak to life’s most essential questions, and he’s done so with the ecstatic vision and fearlessness of a cinematic genius who seems as if he’s just getting started. Wild, boldly expressionistic… NO MOVIE THAT I’VE SEEN THIS YEAR HAS MOVED ME SO DEEPLY, made me feel as optimistic about cinema or engaged me with such intellectual vigor as EO, whose octogenarian genius auteur and all the donkeys who play EO — Hola, Tako, Marietta, Ettore, Rocco and Mela — deserve all the love and the carrots, too. – Manohla Dargis, The New York Times
EO’s personality shines thanks to Skolimowski’s daringly imaginative depictions, both visual and emotional, of the donkey’s point of view. – Richard Brody, The New Yorker
A FLAMBOYANT, VISIONARY WORK. The wildest, youngest film in the Cannes lineup was made by an 84-year-old director up for anything. – Jonathan Romney, Film Comment

EVERYTHING EVERYWHERE ALL AT ONCE 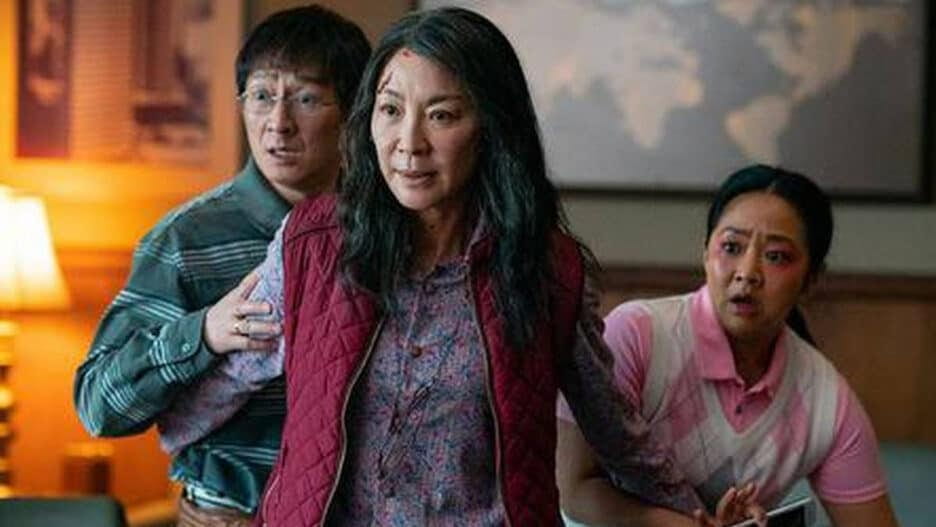 Locations Free Parking What else is Showing this Month? Contact Us Subscribe to our Newsletter
Opens Feb 18th. Stay tuned for times and locations.
Everything Everywhere All at Once led all films with 11 Academy Award nominations including Best Picture and Best Director. By turns very funny and surprisingly moving, it tells the story of an aging, immigrant mother who is contacted from a parallel universe and told that only she can save the world. Everything Everywhere is an inter-dimensional head-trip through alternate universes comprising time, luck, regret, and myriad parallel realities. The fate of the world hangs in the balance.
Writer-directors Daniel Kwan and Daniel Scheinert (collectively known as Daniels) are best known for their inventive music videos and the 2016 feature Swiss Army Man
139 minutes • in English, Mandarin and Cantonese with subtitles
An ORGIASTIC work of slaphappy genius. – Indiewire
One of the most ORIGINAL and CREATIVE films of the past couple of years. – San Francisco Chronicle
Everything Everywhere All At Once is everything cinema was invented for. – Empire

The Ryder Film Series has presented the best in international, independent, and classic American films in Bloomington for over forty years. If your taste runs toward personal movies that you won’t find at the multiplex, major festival winners, or activist documentaries, you’ve come to the right place.

The Ryder screens films at several locations, each with its own unique charms.

A monthly film program is published in The Ryder magazine, Bloomington’s free magazine of the arts and popular culture. The magazine is distributed in over 250 locations in and around Bloomington and the Indiana University campus.

We welcome suggestions. Tell us what you’d like to see. We can be talked into almost anything.